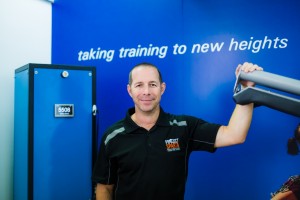 Before taking up residence on the Gold Coast, Rob Darley was a member of the cycling squad, where he enjoyed success in individual sprints and the team pursuit. He juggled his cycling commitments with his work as a sports therapist, PT and cycling coach over the years.

Since moving to Australia in 2006, Rob has continued his cycling and won the Queensland and Australian Masters Championships in 2007. These days, he’s married with two children and is a trainer, assessor and managing director of Altitude First International Pty Ltd and the Club General Manager for Project Sparta.

“Throughout the late 1990s and early 2000s I was one of many trainers in the UK driving for a national registration of exercise professionals, (later REPS) primarily as a recognition of education and experience, quality control and to provide reassurance for clients. Ongoing education, code of conduct and building on the credibility of our industry are the main benefits,” Rob said.
“When I started working here in Australia, I chose to register with PAA because of their high standards, commitment to the industry and also their friendly approach.”

As an athlete, Rob experienced first-hand the benefits of altitude training; where athletes train at high altitudes to improve their competitive performance. Wanting to share the benefits not only with other athletes, but the general population and keep fit enthusiasts, he has spent the last eight years developing an altitude training platform that he now applies at the high performance altitude training facility on the Gold Coast. Project Sparta is open to people of all fitness levels. It offers two altitude training simulations: Alpine Conditioning, which simulates training at 3300-3500 metres; and Himalayan Strength, which mimics conditions at 5300-5500 metres.
But for Rob, starting Project Sparta was more than establishing a training facility. It is also a social enterprise, with 100% of all membership fees donated to Project Futures; a charity that is working towards ending human trafficking and slavery by supporting services that rescue, rehabilitate and reintegrate victims and survivors in both in Australia and Cambodia. All of Project Sparta’s operational and running costs are covered by Synergy Fitness. In lieu of membership fees, Project Sparta members make a weekly or annual donation to Project Futures.

“What I love doing more than anything else is supporting vulnerable communities. Project Sparta is the first social enterprise of its kind. I feel very proud to play a part in generating donations to Project Futures from Project Sparta members as well as businesses donating memberships to support local athletes training for the 2016 Olympic Games in Rio de Janeiro.

“Our tag line is ‘TRAIN FOR CHANGE’. You train for our own health and wellbeing, yet 100% of the revenue raised makes a difference to the lives of vulnerable people worldwide,” Rob said.